A medieval village of origin and structure as Castellar de n'Hug, must necessarily have examples of Romanesque art in the form of shrines, bridges, churches, houses and even castles.

Each one of the stones we’ll find reminds us of the rich Catalan Romanesque past.

Multitude of corners shows us the past through paintings like those of Sant Vicenç de Rus, or through the simple lines of the Sant Joan de Cornudell chapel.

Walls, apse, buttresses, bell ... you would have never thought that the stones have so many things to tell! 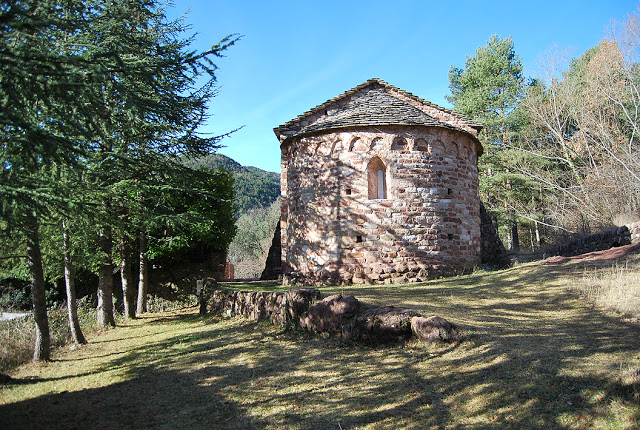 Sant Vicenç de Rus is first mentioned 961 as a donation to the monastery of Sant Llorenç near Baga.

The Bishop of Urgell, Ot, consecrated it on February 6, 1006, confirming its parochial character from the year 1312 on. The chapels of Sant Andreu and Santa Magdalena were built in the 14th century. It suffered damage in the walls caused by earthquakes in the years 1420 and 1430 it was during the eighteenth century when it came under Santa Maria de Castellar de n'Hug.

It has a single nave with a barrel back and a semicircular apse with bow of a quarter of a sphere. Its construction dates back to the early 12th century and has Lombard Romanesque character, which becomes more visible on the outside, where the apse is decorated with blind "arcuacions". On the south façade, we find the entrance door, under an arch without any ornamentation. The bell tower is a simple wall with two openings. During the campaigns of restoration during the years 1983-1685, a necropolis and various graves of the tenth to twelfth century were found, which suggests the existence of an anterior Romanesque church.

In a set apses you can find remains of a mural that shows Christ in Majesty and the apostles. In the chapel of St Mary Magdalene from the Gothic period there are preserved some painted scenes of her life. The original Romanesque paintings of the apse are exposed in the Diocesan and Regional Museum of Solsona, though you can see a copy of it in the church. Another artwork of this church is also exposed at the Episcopal Museum of Vic: a wooden statue of the Mother of God dated from the late 12th century.

Visits: Petra Patrimoni, TEL. 608 74 88 89, This email address is being protected from spambots. You need JavaScript enabled to view it.

September to June: Weekends and holidays from 11 to 14h.

Outside the official visiting hours, you can also arrange guided visits. 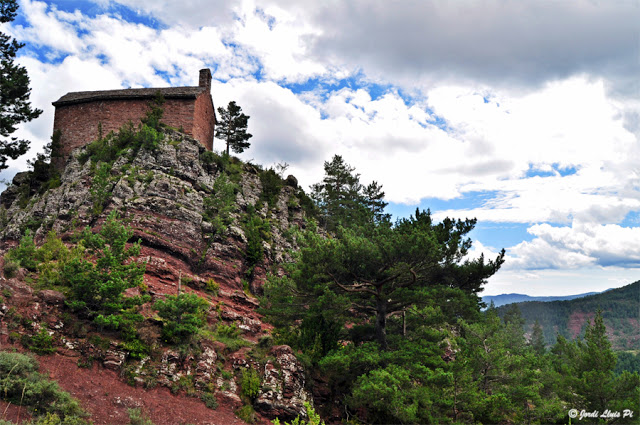 The small church of Sant Joan de Cornudell is located northeast of the town of Castellar de n'Hug, upon a slope formed by red rocks.

Its setting is secluded, silent and rough. The authentic charm of this little church gives this place a unique beauty.

Sant Joan de Cornudell was part of the ancient barony of Mataplana and ecclesiastical jurisdiction of the Bishop of Urgell. The first reports of the site are dated in 921, together with the possessions of the monastery of Sant Joan de les Abadesses.
Cornudell is the name of a town in the high-middle ages, a spot where first population settled in the Alt Berguedà. The centre of this settlement is considered to be the church of Sant Joan, which should never have been a parish because it is not mentioned as such in the writings of Berga until 1312.

The parish church of Santa Maria, build in the XI century in a Romanesque style, was reformed over the years.

The current structure of the church is considered to be the authentic part, with corresponding nave, the entrance, with its semi-circular arches, decorated with tools and the almost completely preserved bell tower in which we can observe ‘adovellat’ window arches, although some are boarded-up.

The whole inside is neoclassical, except the door, the bell tower, and a piece of wall.