At 1300 meters above sea level and below Castellar, you will find the spring of the Llobregat River.

It is a natural spectacle of water and nature, offering a wide range of different shades of colors throughout the year, and it deserves to stop by and observe the birth of a river that vertebrates Catalonia from mountains until the Mediterranean, passing through 28 municipalities.

To get there walking, the path starts at the villages car park which leads you to the path. You can also get there by car from Castellar de n'Hug down the road towards the Pobla de Lillet, the tour is clearly indicated by signs.

As you walk between vegetation and the river, you canhear the sound of water, a wide range of different birds singing and admire the flora and vegetation of a riparian ecosystem.

The water leaves the calcareous rock as the result of rainwater and snow accumulated during the winter in nearby peaks as Tossa de Puigllançada and Alp.

The main upwelling in the form of waterfalls is quite a show in the spring during the thaw. From the viewpoint nearby, you can see and enjoy the power and beauty of water. 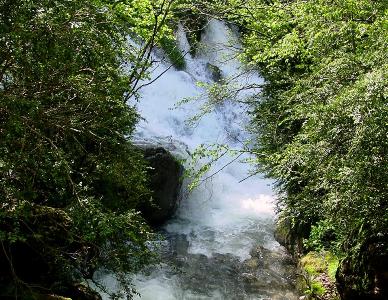 
But ot always in Castellar de n'Hug all were flowers ... hand here goes...

"The Legend of the Witch of Castellar"

No one in Castellar could understand that Hug Mataplana, the noble lord of Castellar, had chosen this foreign lady to marry.

Hug was noble and generous, that lady was proud and selfish; everything in him was goodness, in her was the blackest evil.

Until then, Hug vassals had lived in peace and quiet under the rule of his master, but the arrival on the castle of that arrogant and proud lady turned it around. Her influence on him was so evil that Mr. Hug got sick and within a few weeks died without getting to know the daughter they expected.

The vassals couldn’t find an explanation for this sudden death. It seemed a thing of mystery and trickery. And that's how the rumour started that Mrs. Hug was one of the most evil witches.

And they weren’t wrong; some months later, the expected daughter was born, and as if it was a punishment for the evil mother, she was so ugly it was scary to see her. She had red hair like fire and eyes small and glowing like those of animals that live in the night forest.

- My daughter has to be the prettiest of these lands- thought the witch, full of envy.

And since that was impossible, she decided to wipe out all the girls who were born in his domain by throwing them into a cave close to an untamed mountain top she had discovered near her castle.

Many nights, especially when they were stormy, the witch visited the cave and listened laughing to the shouts of these innocent creatures, pleased and satisfied by her vengeance. Until one night, the shouting had stopped. ‘Why are the children so quiet tonight?’ She thought.

But as if the depths of the earth wished to know nothing about that evil lady, a great river of water came from inside the cave, pushing the body of the witch out of the cave.

The legend says that that’s how the Llobregat River was born, and that its waters carry actually tears of these poor girls.

They also say that the strength of that river was so great that the witch was turned into a reddish powder that since then is dying the surroundings of the river. And still today, when storm comes, it gives a reddish colour to the waters of the Llobregat.

And for those who can’t believe it, (there is always someone who claims that these legends are stories invented around a fireplace), we recommend warmly to visit the source of the Llobregat River, stroll around Castellar de n'Hug, and check whether there are or not red stones and red sand.